Like you we're being traced thru the global network of digidungeons and they're closing in quicker than predicted. To shake our chasers, who are so easily confused, we've had no choice but to cease all surface operations for precisely one cycle of each of the natural seasons. It was during this time that we once again arbitrarily moved to various-antinational.blogspot.com.

RABIES "WHAT YOU KNOW ABOUT ME" 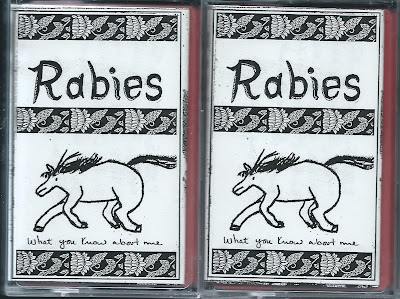 Here it is, our first foray into "full length album" territory. I am very proud of this, I will admit it, because Rachel wrote all the music and needless to say I am her biggest fan. It was a slow burning project, compiled from some of Rachel's slightly re-worked demos over the years and then a bunch of new tracks we recorded with Jeremy on jx-3p synthesizer in the summer/fall of 2016. Then I slowed waaay down to mix it with our friend Rob Drisdelle, had many a conversation about the "top 40 potential" and all the dollar signs that would inevitably pour on us from the golden chalice of capital. Even thought of building a house with a mote around it, complete with crocodiles imported from the Amazon. But all that evaporated because, life's too short for motes and walls and gunning for popular exposure. Plus Rachel made the mistake of giving in to my requests to "produce" it, and guess what I like XPRESSWAY more than most things. So we're proudly back to zero top 40 potential.

Dig it. I don't have a favourite track because they're all great songs in my book, and I've heard this well over 1000 times at this point. If you want a physical copy you'll be getting a pro-dubbed cassette with hand drawn illustrations by Queen Rachel. She is finishing the last bunch of copies right now as I type this. Online streams/free downloads/tape purchases can be found here. There will also be a few special CD copies for the avid collectors after we finish with our community-radio-promo experiment.

Also a release show happened a few months after the fact. Collaborative poster by myself and Nicholas Dourado: 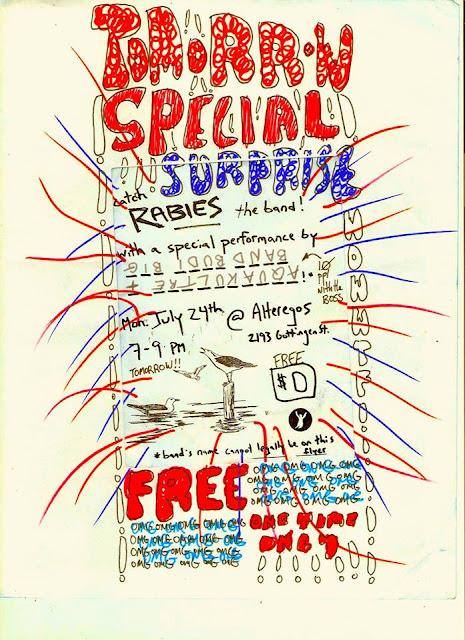 ENJOY YOUR LIFE WHENEVER POSSIBLE
-3D Influenza
at July 28, 2017 No comments:

ANOTHER EXTERMINATOR EATEN BY BUGS

It's been over a year since we've updated this website but what is a year in the cosmic eternity? Nothing. Still, stuff has happened in our little world, there has been some releases and shows that went undocumented on here, so I'll do a quick recap before I post the current release.

First off there was a release in 2016, and it was the Noise Policy "Speak Destruction" cassette. 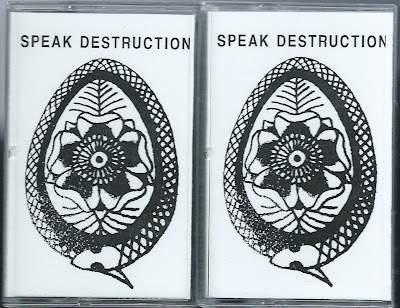 This little puppy was recorded by none other than Tri Le of Surveillance and mixed by the very young, the very handsome Ben Brennan of Word on the Street/Weed Thief/Geil acclaim. It features 4 people all of whom have been members of many a great punk music act that has popped up and dissipated over the years. I remember when they first started playing gigs I was immediately drawn to what I perceived as the "desert" quality of Rosie's guitar, and also their great songs. Why it never made it to the internet is irrelevant because it sold out very quickly except for the last couple of copies I had kicking around which are also finally now GONE. But here's a download link if you want to check it out (these are .wav files). Notice the very "high" production quality. That would be Tri and Ben's doing, definitely not mine. Cover art was done by formerly local tattoo sensation Lydia K. Here's what the poster looked like for the release show: 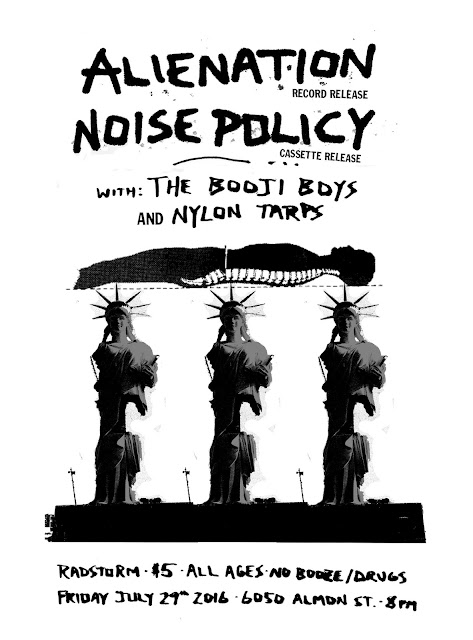 Other than that the rest of 2016 was spent in metaphorical bunker. Surveillance stopped playing shows in July and Rachel and I stopped considering local acts to release, for no reason other than we wanted to disappear for a little while. During that time we put together a new band though, featuring selections from the Rachel Fry songbook, performed in the unpopular rock style, past and present, called RABIES. This band also features Jeremy of Special Costello and the great Bria Cherise Miller who is well known to the local art/activist community but new to the performative music world. Let's give her a round of applause because she picked up that bass guitar like she was acting upon mere instinct and hasn't looked back since. Stand up and take a bow, Bria. Our first show was in December and was very memorable because of the esteemed MAJE appearance: 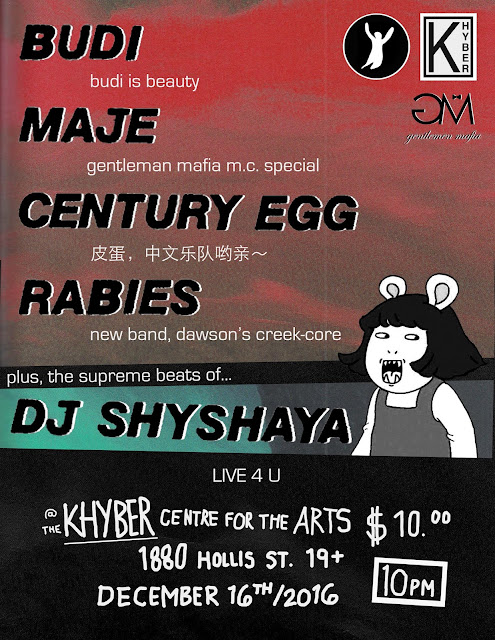 Which brings us to the current year, the year of 2017 when everyone complains about our governments as if they haven't been exploitative, anti-social farces from the get-go. Burn baby burn, disco inferno, but keep the good stuff please. Learning new shit every day and it feels great, particularly the lessons on "how to be less miserable". Turns out there are things you can teach and things you can't, both of which hold equal value. Either way I look forward to the future, and given the circumstances I think that says A LOT.

p.s. I just noticed a file on my mediafire account called "Various2012to2016" that I put together for a CKDU archive thing we did last year. I think this has .mp3s of everything we've put out up to the Noise Policy release. I'll put it here for anyone interested.
at July 28, 2017 No comments:

variousrecords.blogspot.com
at July 28, 2017 No comments: